The two most famous birds of the Dry Tortugas are the brown noddy and the sooty tern. The reason these birds are so closely associated with the Dry Tortugas is that they come every year to Bush Key and, collectively, do their nesting rituals. If you come to the Dry Tortugas between the months of March and September, you will be able to view the birds. You cannot actually go on to Bush Key during these months, but you are able to look at them (and we recommend binoculars) from a separate key.

The sooty tern is a seabird that is part of the tern family and is also known as the Wideawake Tern (or simply, wideawake). The unusual name comes from the loud and incessant bird calls that they make when they are gathered together in one of their colonies. The birds are usually about 16 inches long with a wingspan of up to 34 inches. They have a dark, slender, and pointed bill and a long, dark, and forked tail. They have a black topside and a white underside. Their head is rounded and they do not have the crests that are common in other seabirds.

Sooty tern are typically a migratory species. They are seabirds predominantly and usually are found in island or tropical environments, close to the ocean. You can find these birds more in the Atlantic Ocean and Caribbean Sea than in the Pacific Ocean. Like they do in the Dry Tortugas on Bush Key, they almost always breed in big colonies and on top of coral or some other rocky type of island. Its nesting behavior includes scraping the ground and creating a hole where they lay one to three eggs. Breeding is one of the only times these birds come to land for an extended period of time. They can stay out at sea for anywhere between 3 to 10 years, by soaring in the air or floating on the water. 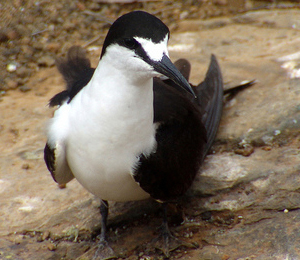