Key West visitors who have gone out to the fantastic stretch of seven islands called the Dry Tortugas will tell you that the absolute best snorkeling in Key West is on the Dry Tortugas. The snorkeling here is like no other, in terms of the amount of sea life, color, and movement you will see underneath the clear waters of the Gulf of Mexico. Some tour operators allow you 3, sometimes up to 4, hours of snorkeling time. With the amount of places to go in the Tortugas water, you will definitely be able to fill up your snorkeling time.

The reason Dry Tortugas snorkeling is so ideal is because the islands themselves are part of the coral reef that surrounds Key West and the islands in this area of the sea. The islands are made up of reef and sand. Many of the smaller isles often disappear and become a part of the undersea snorkeling environment. The waters surrounding the main Tortugas islands are shallow, clear and warm. Unlike in most snorkeling sites, snorkelers on the Dry Tortugas do not have to catch a boat to get to the site of the coral reef-the coral reef is right off the shore! Snorkelers merely walk into the water with their gear and start snorkeling.

The coral reef is an aragonite structure that is made up of living sea organisms. They are low in nutrients and, in fact, any overabundance of nutrients can ruin the fragile ecosystem. The reef that makes up the Tortugas is a fringe reef, which is the type of reef that is attached to a shore or border. Small primitive-type creatures called polyps are the ones that create the coral reef. They do this by accumulating into little colonies that eventually congeal and form the solid structures of the reef. The corals are not rocks, but these colonies of these tiny primitive creatures.

Despite their low-nutrient balance, the coral reef is an ecosystem teeming with animal life. There are certain species of fish that live in the coral reef almost exclusively and are typically called reef fish. These fish feed themselves on small animals among the reef, seaweed and sometime even the reef itself. They include labridae, parrotfish, and butterflyfish. Other fish that make the reef their home or are often found among the reef are the ones that swim above or around the reef and either prey on the smaller reef fish or eat seagrass. The predatory fish include pompanos, groupers and mackerels, the other kind include snapper, pagellus and conodon.

Other sea life that make the coral reef their habitat include the tentacled sea anemone, lobster, and sponges. Sea turtles used to be very prominent in the Dry Tortugas ("Tortuga" actually means turtle in Spanish) coral reef but have been victims to hunters and their presence in the Tortugas have diminished considerably. Still, there is a good chance that you will see at least a couple of sea turtles while out on the island.

While heading out for the best snorkeling trip of your life out in the Dry Tortugas, keep in mind the delicateness and fragility of the coral reef. Too much human contact is harmful for the reef, and make sure to not step on a coral head thinking it's a rock. Also, be respectful to the wildlife that make the reef their home. You are, after all, in their home. Friendly interaction between snorkelers and the animals assures future generations of being able to see the beauty beneath the waters of the Gulf of Mexico. So take the opportunity to go on what will likely be your most rewarding and successful snorkeling trip ever and head out to Florida's Dry Tortugas National Park. 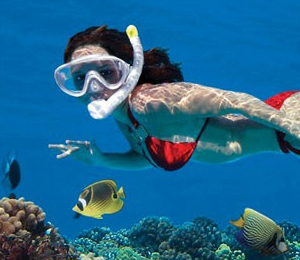