Normally, winter is the slowest of the birding seasons in the Dry Tortugas, but you would not know it this season. With the cold fronts, we sometimes experience some of the best birding, as the storms will sometimes send the birds off course. The variety and numbers may not be great, but each different species offers something of a surprise. Among the different species, our birdwatchers witnessed the Yellow-rumped Warbler in its winter plumage foraging along a tree branch on the island and wagging its tail in Yellow-rumped-Warbler fashion. Their yellow-rump patch earned them their name "Yellow-rumped Warbler," also known as "butter-butt," which became a local colloquialism by which they were often pointed out in the field.

No surprise that we have named the Yellow-rumped Warbler our favorite bird spotted this week. This warbler is vivid and conspicuous and most frequently sings from the high canopy of trees. During the winter, they scatter in loose flocks, with usually only two or three birds observed at one time. While constantly chirping a "contact call," they are able to keep their flock together.

They are fairly large with a sturdy bill, large head, and long, narrow tail. During summer, both female and male are a smart-looking gray, with bursts of white in the wings and yellow on the sides, face, and rump. The male is the most strikingly shaded; the female is a bit duller and may even show some brown coloring. During winter, both birds are a paler brown with a bright yellow rump and an occasional bit of yellow on the sides. These late warblers that show up on our tiny islands of the Dry Tortugas are most beautiful in their winter plumage.

While enjoying insects, seeds, berries, and spiders, these guys fit right in here. The Yellow-rumped Warbler will cling to the bark surface to find hidden insects more than most other warblers do, but they will also sit on an exposed branch and catch the insects passing by much like a flycatcher. While being the most versatile foragers of all warblers, you are most likely to see them fluttering out from a tree while capturing their prey. They are also able to very quickly switch over to eating berries in the fall.

Males arrive a few days before the females on the breeding grounds. In a bulky nest filled of grass, twigs, rootlets, and lined with feathers and hair built by the female, four or five white eggs, spotted and blotched with brown, are placed in a conifer. While the female incubates the eggs for 12 to 13 days, the male feeds the female at the nest. The male will also occasionally help incubate. The young are fed by both the female and male and generally leave the nest around 10 to 14 days after hatching. Within a few days of leaving, they can make short flights. Once they fledge, the female will usually start a second brood while the male continues to feed the first brood for up to about two weeks.

Our birders enjoyed the visiting Yellow-rumped Warblers and the photo sessions the warblers would sometimes reluctantly allow. All in all, it was a great week for birdwatching. 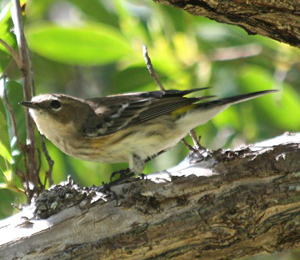