Fort Jefferson, at various points throughout the year, plays host to hundreds of different species of birds. One of the more elusive was recently spotted there, a happy harbinger of spring's approach. The Scarlet Tanager is one of many migratory birds that passes through Fort Jefferson both in fall and in early spring, though it is also one of the shyest, living high up in the trees. This makes it especially popular with the bird watchers who visit the park, though it can be hard to locate for the less experienced.

This gorgeous medium sized bird varies greatly in plumage throughout the year. During the summer mating months the male of the species is a bright vibrant red with black wings and tail. It is easy to see from his coloring where the species got its common name. However, during fall and winter the red feathers are exchanged for more a more somber yellowish green, more closely matching the year-round colors of the female of the species or of the juveniles. The latin name, Piranga olivacea, likely comes from this more subdued coloring. However, even in winter when both genders more closely match in coloration, the wings of the female are still a dark olive, while the wings of the male remain black.

Another way to identify this bird is by its chirp. The males have a hoarser, shriller chirp while the females are a bit quieter and softer. Both have a distinctive chick-burr sound, though males will also give longer calls, further differentiating themselves. As they often hide far up in the trees, visitors hoping to spot them should listen as well as look.

The diet of the Scarlet Tanager consists mainly of various insects, though they have a particular fondness for berries as well. The short beak is suited to both types of food. When it hunts it is generally able to catch and eat its prey alive, and can both pluck insects from a stationary spot, such as ants, or snatch them up mid-flight, such as bees. However, bigger insects sometimes require some extra effort from this bird, who will squash them against a tree trunk or other hard surface to kill them before ingesting them.

The Scarlet Tanager is a migratory bird, which is one reason why it is only seen in Fort Jefferson at specific times of the year. During the summer months they live in the eastern United States and southern Canada, preferring to nest in high, shady branches of undisturbed deciduous forests where they can raise their young in peace. These long lived birds, who can survive over 10 years, even sometimes adopt the eggs of the Brown-headed Cowbird as their own, though it is likely more due to the fact they cannot differentiate the eggs rather than from altruism. In the winter months, when their mating season is complete, they can instead be found in northern South America. It is only in between, during their migration, that they can be seen at the park. 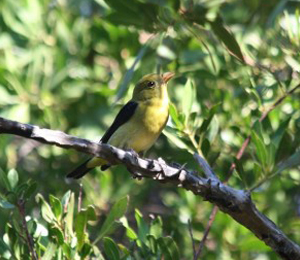