We had another beautiful week at the Dry Tortugas with clear skies and temperatures in the high 60's to low 70's -- just absolutely perfect for birding. Our bird watchers got lucky on the first day. We spotted three beautiful Royal Terns perched on a coal piling -- perfect for some great photo sessions.

This beautiful tern has a mostly white plumage, dark brown eyes, a distinguished carrot-shaped, bright orange bill, and black feet and legs. The Royal Tern is more robust and larger than most other terns and has been known to live a very long time. It is very hard to recognize the sex of these terns; females and males look the same.

These lovely creatures are widely distributed worldwide, sometimes seen a distance offshore, but never too far inland unless there is an unusual circumstance, such as a hurricane. The Royal Tern will usually spend a year or two on the wintering grounds after fledging. This colonial nester is less aggressive than other terns, but does defend the nest site all by itself.

Like a lot of the shore birds, Royal Terns breed on the ground and scrape out their nest in the dirt. Because their breeding grounds are prone to flooding, the Royal Terns defecate right on the rim of their nests. This hardened feces helps prevent the nest from washing away. In Florida, they will sometimes nest on rooftops. During the courtship, the male will bring a fish to the female. She will either swallow the fish right away or, on occasion, will keep it in her bill during the courtship display. Also, the male will continue to feed the female throughout the breeding season.

Usually there is only one buff, spotted egg which will be incubated for about 25 to 31 days. Both parents share the incubation duties. Unfortunately, while Royal Terns are fiercely protective of their nest sites and chicks, the eggs are often in danger of being destroyed by sand crabs. The surviving chick learns to fly at about the age of one month old. The parents continue to care for the young until about the age of five to eight months. The young leave the nest within one day of hatching and begin to assemble together in a group known as a creche, which can have as many as thousands of chicks ranging in age from 2 to 35 days old. The parents will only feed their own chick, and interestingly enough, can manage to find it in the crowd, probably through its call.

The Royal Tern forages in groups or sometimes just alone around lagoons, estuaries, and mangroves, feeding mostly on small fish. You can often observe them flying just above the surface of water and diving, sometimes even performing aerial skimming. They are quite entertaining.

It was another great week at the Dry Tortugas. The rolling waves, the perfect weather, and the enchanting shrills of the birds helped capture the idyllic essence of this beautiful, remote island. Come out and enjoy some great weather and fabulous birding!! 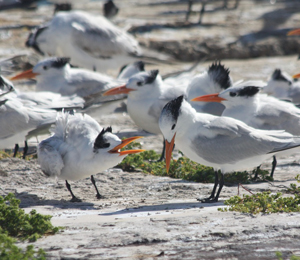