Until Cletus took up residence, not a single American crocodile had been spotted in the Dry Tortugas since Ponce de Leon’s arrival on these tiny islands in the 1500s. No one knows where this massive croc swam from in 2003, but he seems to have taken up permanent residence in Dry Tortugas National Park, where he has been affectionately nicknamed Cletus by the staff. Many feel that poor Cletus must be quite lonely, not having seen a member of his own species in over a decade.

With only about 2,000 to 3,000 of their kind in the entire United States, all of the species are thought to live in extreme South Florida. Entirely different from the more aggressive American alligator, these crocs fell under federal protection in the 1970s, at which time the population had dropped to around 300 animals, mostly because of hunting and development.

Checking Up On Cletus

Every few years Mark Parry, a National Park Service wildlife biologist, arrives with a team to check up on Cletus. Specializing in monitoring large marine reptiles like alligators and crocodiles, Parry sets out by boat with other biologists and park staff to gather information for a growth and health assessment on Cletus. This is of particular interest to biologists as crocodiles do not normally live in an environment like Dry Tortugas where there is no fresh water, and they are interested in seeing if growth is faster, slower or the same in this purely salt water home. Growth is measured from baseline data gathered when the croc was first caught about six years ago.

Catching Cletus is a challenge and on this particular evening, the crew takes off to make yet another attempt under windy conditions and a full moon. Locating Cletus is finally accomplished by catching the eye-shine from the creature’s highly reflective retinas, showing up against the dark shoreline undergrowth as two disembodied golden globes. Parry guides the captain into the shallows where the croc has been spotted and steps into the knee-deep waters when the water becomes too shallow for the boat.

Cautiously approaching the undergrowth where Cletus hides, Parry pokes his head in, then quickly slides the snare pole in and fastens the lasso over the croc’s head. The angry creature, thrashing and snarling with teeth gleaming, is led along the beach like a vicious dog. As three of the crew approach to help Parry, he warns them to give Cletus some room while he makes sure the croc wouldn’t get snagged on anything or drown. Sneaking up on the croc from behind, Parry sits astride Cletus’ shoulders, pushes down on the snout until it closes and then swiftly wraps several loops of duct tape around the enormous snout. Although a crocodile’s jaws are incredibly powerful, once closed, the animal has little strength for opening them.

Once the jaws are soundly secured, Cletus is carried onto the beach and the crew attempts to get him set as straight as possible. Parry then sets a knee on the croc’s neck and proceeds to calmly measure him with a yellow tape. He’s looking for measurements including head, snout and total length as well as tail girth and sex. For the entire half hour the growth assessment takes, Cletus glares straight ahead with angry yellow eyes. Cletus comes in just under nine feet and weighs 155 pounds, roughly a foot longer than when he was captured about six years before, which is normal for the species.

Once the deed is done, Cletus is borne back into the shallower water tail first on Parry’s instructions. Though his legs hand loose like a sleepy child, once Cletus is set in the water, he spins around, dives beneath the shadowy surface and makes a speedy escape. 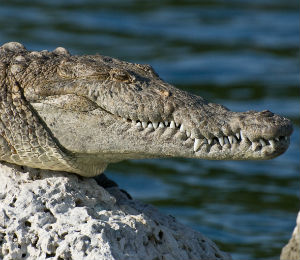