Juan Ponce de Leon was a Spanish explorer who is thought to be one of the first Europeans to step foot on many of the Central American and Caribbean lands. Born into a noble family in San Servas, Spain, Ponce de Leon was first a soldier and served a Spanish knight. When he was young, he heard of the "discoveries" by Christopher Columbus and volunteered himself to go on a trip to find the island of Hispaniola. When they reached Hispaniola, he was able to withstand disease and food shortages and assist in settling the island by enslaving the native population.

A few years after his successes in Hispaniola, Ponce de Leon crossed over to Puerto Rico (then called Boriquien) and conquered the people over there. He was quickly named governor of Puerto Rico by the Spanish king. Supposedly, Ponce de Leon treated the Indians under his governorship in a non-violent manner. In 1512, the king stripped Ponce de Leon of his governor title but granted him permission to discover and settle the island of Bimini.

In March of 1513, Ponce de Leon went from Puerto Rico to the northeast and landed in Florida. He was quite impressed by the variety of flowers and named the land "florida." He sailed along the coast of Florida and ended up at Pensacola Bay. On his way back to Puerto Rico, he discovered the small islands that Key West visitors are so well-aware of today, the Dry Tortugas. He named them "las Tortugas" (Spanish for "the turtles") after the abundance of sea turtles found on the islands.

When Ponce de Leon then returned to Spain, he received an extra grant to go and establish colonies in Florida. He went and started up colonies but in 1521, the native attacked and Ponce de Leon was wounded in battle. He went to Cuba to try to heal but died a few days after his arrival.

Today, in the Dry Tortugas, we know that Ponce de Leon was the first person to discover these islands and recognize their strategic placement on the passageway from the Gulf of Mexico into the Caribbean. 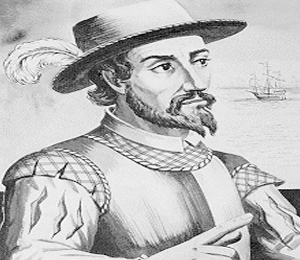