People run to the Dry Tortugas for the absolutely amazing snorkeling that can be done in the shallow waters of the Gulf of Mexico. The snorkeling is done in the magnificent stretches of coral reef that are part of the islands themselves. This is not the type of snorkeling you have to ride out to on a boat; you simply swim off the shore and you can see the fascinating arrays of colors and corals that are found off the shores of the Dry Tortugas.

Coral reefs are quite an interesting structure. Some of them are considered dead but at one point all coral reefs were, technically, alive. The coral reef structures are a complex and intricate structure made mostly from microscopic organisms called polyps. The corals are mainly the calcium carbonate byproduct of these creatures that then encases the polyps like a skeleton. The coral reef that is found in the Dry Tortugas starts off just off the coast of Stuart, Florida, in Palm Beach County. It stretches all the way to the Tortugas. There are different kinds of coral reef throughout the world such as a barrier reef and a bank reef. The coral reef in the Dry Tortugas is a fringe reef, which is a type of reef that is attached right to a shore.

The coral reef's complex structure is ideal as a habitat for a diverse fish and sea life population. An interesting aspect of the Dry Tortugas coral reef is that, due to their location, the coral reef has been virtually untouched by humans, unlike the one that is found surrounding Key West which was seen divers, wrecks, and all sorts of human activity. In the Dry Tortugas, the reefs can serve as a sort of control subject by which to compare the other Florida reefs to. 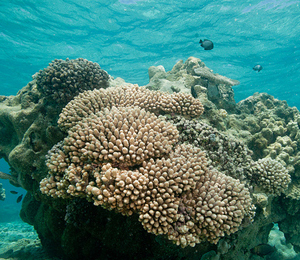