This week, one of our bird watchers thought they saw a penguin on the Dry Tortugas. A pretty honest mistake if you're looking at a Razorbill instead. This bird bears a passing resemblance to the penguin. And, yes, she was looking at not only one, but two Razorbills.

These Razorbills have a superficially likeness to penguins, in that they are black and white in color, with an upright posture, and with a few of their habits incorporated therein. Nevertheless, they are not really closely related at all. These very attractive Razorbills have a graceful beauty with their glossy black upper plumage and white breasts and pristine underparts. They have a thick black bill with a blunt end and a vertical white line. In contrast, the breeding adult has a white line from its eye to the top of its bill. The nonbreeding adult has a white lower face and throat. Their very unique heavy beak with that vertical white streak distinguishes the Razorbill from the other auks.

The Razorbill is a large auk and normally prefers breeding in rocky shores, cliffs, or on the islands. Like all auks, Razorbills are birds of oceans and seas. They usually nest in large colonies and lay their eggs on the ground or on bare rock. The Razorbill lays only one egg per season and prefers to rear its single chick on a mainland cliff, on a rock ledge, or island. The parents take turns foraging and taking care of the egg or young. When feeding its young, the parent will hold a few fish in its bill and fly back to the nesting area. Even if it must fly more than 100 kilometers out to sea to feed during the egg incubation, it will do so. But, when taking care of the young, the foraging stays closer to the nesting grounds.

These birds forage for their food by swimming underwater, and can stay underwater without surfacing for about one minute. The Razorbill is capable of diving very deep and has been spotted by a submersible operating at close to hundreds of feet down. They also catch their prey and eat them underwater, which consists of mainly fish, some marine worms, and crustaceans.

While the Razorbill is almost entirely restricted to salt water, where it likes to frequent sandy beaches, estuaries, harbors, and near shore waters on the coast, it has been being seen more and more lately at phosphate mines in Florida and over inland lakes, especially in the winter.

This beautiful bird was dubbed "Razorbill" because of its beak's resemblance to an old-fashioned cut-throat razor. These sea birds typically float on the waters around the pier and are often known for causing quite the scene. If you see a bunch of folks crowding around a pier taking pictures, you can bet there is a Razorbill or two nearby.

Hop on the Dry Tortugas ferry and come out and join us for an exciting and memorable trip. The birding has never been better!!! 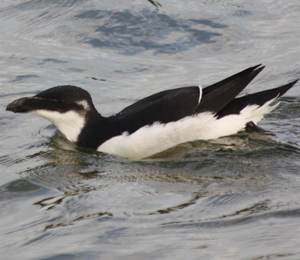